Lesley Tsina (Writer/Performer)  is a writer, actor and comedian from Palo Alto, CA. She’s appeared on “Conan,” “Black-ish,” “Community,” “Flaked,” “Funny or Die Presents” and several national commercials, including the one where the camel walks around the office saying “Hump Day.” She was selected out of thousands of applicants to perform in the CBS Diversity Showcase. Her first book, “Restart Me Up: The Unauthorized, Un-Accurate Oral History of Windows 95” was recently published by Devastator Press. 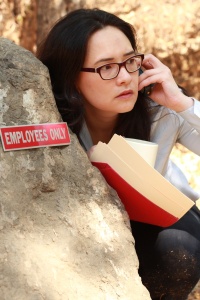 Kevin Pedersen (Director) Kevin is a writer and comedian based in Los Angeles. His writing credits include working as a writer and executive producer on Popzilla, a show he co-created for MTV. Other writing credits include ABC’s Malibu Country, HubWorld, Word Girl, The Onion, The Showbiz Show With David Spade, and 10 Dates From Hell on TBS.com. He spent four years on a UCB Harold team, co-directed “Sketch Cram,” and is the host and producer of the movie-themed variety show “Spoilers Revealed”. Stage credits include “Maude Night,” “Other People’s Stuff,” “Quick ‘n Dirty Musicals,” “Writing Under The Influence,” and the sketch group “Thirty:30.”